In a recent article, I introduced the concept of the Gibbs energy of a chemical reaction. Before building on the content of that post, I’d like to recap its most salient points:

Gibbs energy change is an important and broadly applicable thermodynamic concept which provides a reliable way of determining the conditions under which specific reactions or processes will occur spontaneously.

Gibbs energy change values have been tabulated for many different reactions under standardized conditions. Since it’s a state function, various linear combinations of those values can be added and subtracted like algebraic equations to calculate the values of still other reactions.

As was the case with enthalpy, (which I covered here and here), there exist ways of adjusting those standardized values so that they still yield viable answers under non-standard reaction conditions.

The Gibbs energy of a reaction is closely tied with its equilibrium constant (K), whose numeric value represents the ratio of products to reactants at which the reaction equilibrates at a given temperature.

This provides a thermodynamic explanation for why the relative concentrations of substrates for a given reaction affects whether it will occur spontaneously (and to what extent).

In turn, this dependence of a reaction’s spontaneity on relative substrate concentrations is one of the ways in which biological organisms naturally perform many processes that would otherwise be thermodynamically unfavorable.

My goal for this post is to use a couple of examples to illustrate how the spontaneity of some biochemical processes can be affected by relative substrate concentrations, and/or by the coupling of an endergonic (non-spontaneous) process with an endergonic (spontaneous) one.

How do endergonic processes like the synthesis of proteins, nucleic acids, and other biomolecules in living organisms ever occur spontaneously? In my preceding article, we saw that relative substrate concentrations influence whether a reaction is spontaneous. Indeed, this is one of the ways in which processes with unfavorable free energy values under standard conditions can and do occur in living organisms. I’ll discuss another important way in which this is accomplished momentarily, but first let’s look at an example of this.

The Tricarboxylic Acid (TCA) Cycle, is a series of chemical reactions used by aerobic organisms to oxidize acetyl-CoA to generate ATP (or GTP), as well as substrates necessary for several other biochemical pathways. Those substrates include the precursors of certain amino acids, as well as a couple of high energy molecules called NADH and FADH2 respectively, both of which play key roles in the electron transport chain, which is the third of the four phases of cellular respiration. The TCA Cycle is also commonly referred to as the Citric Acid Cycle (CAC), or simply the Krebs Cycle (don’t ask me why it has three equally common names), and is itself the second phase of cellular respiration. 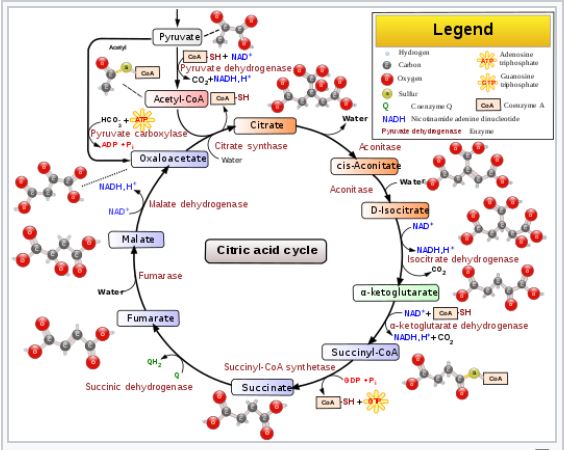 The TCA Cycle itself is a possible topic for another post, but right now I want to use just one of its reactions as an example.

Malate dehydrogenase is the enzyme responsible for catalyzing the oxidation of Malate to Oxaloacetate, the latter of which is the entry point in the cycle for a molecule called Acetyl-CoA, which is derived from Pyruvate (the final product of Glycolysis) (Tymoczko p. 345 – 349). The reaction is coupled to the reduction of NAD+ to NADH (more on coupled reactions in a moment), which makes the total reaction extremely endergonic, with a ΔG0‘ equal to a whopping 29.7 kJ/mol (Lehninger p. 612). Again, just as a reminder, recall that “endergonic” means that the process requires an input of energy, or else it doesn’t happen on its own.

How then does this reaction occur and keep the cycle going?

It can’t be due to the enzyme. Enzymes do not affect the thermodynamic favorability of the reactions they catalyze, nor the equilibrium constant. They affect the rate at which the reactions take place, usually by orienting the substrates in a way that lowers something we call the activation energy of the reaction, which does nothing to the net free energy change of the process. So, what is it?

The answer is that the concentration of the product (oxaloacetate) is kept low in the mitochondrial matrix relative to malate. This is due to it being continually used up in a reaction in which citrate is formed from oxaloacetate and acetyl-CoA via an enzyme called citrate synthase. Consequently, the actual ΔG of the process is negative (and therefore spontaneous) when it needs to be, despite its large positive ΔG0‘.

I’ve already mentioned cases for which the relative concentrations of reactants and products can render certain reactions favorable that otherwise would not be, but an equally important way around this is the coupling of exergonic reactions to endergonic ones.  If not for coupled reactions, many of the biochemical reactions endemic to our existence would not happen, and life as we know it would not be physically possible. One of the most frequent ways in which organisms turn a thermodynamically unfavorable reaction into a favorable one is by coupling the endergonic reaction to the hydrolysis of adenosine triphosphate (ATP).

Under standard physiological conditions, the free energy for the hydrolysis of ATP by water

This is how many of the otherwise unfavorable reactions in living organisms can occur.

Take for example the first step of glycolysis. Recall that glycolysis is the multistep process by which cells take glucose that has diffused from the blood stream into the cytosol and use it to generate ATP (and two copies of a molecule called pyruvate). The first part of glycolysis involves an investment phase, during which ATP molecules must be used. The first of these is a reaction catalyzed by an enzyme called hexokinase (or glucokinase in the liver) involving the phosphoryl transfer to glucose from ATP to form Glucose-6-phosphate.

On its own, the free energy for transferring a phosphate group is unfavorable (ΔG0‘= + 13.8 kj/mol), but when coupled to the hydrolysis of ATP, the combined reaction becomes. 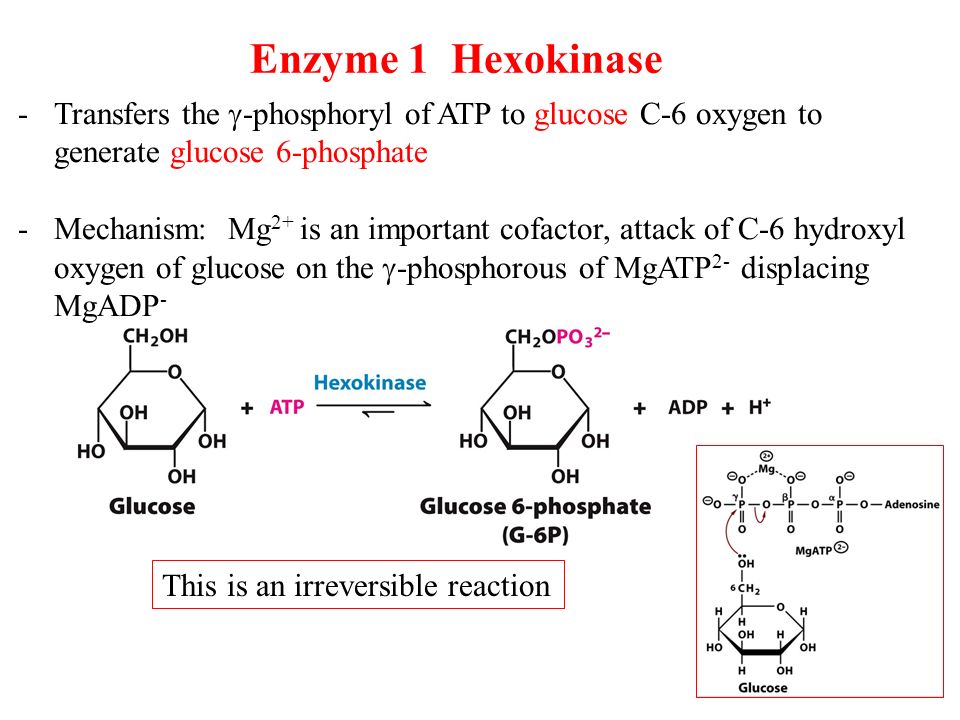 It also enables the cell to keep the concentration of glucose low enough to allow more of it to diffuse into the cell from the bloodstream, (a process which is aided by the insulin-signaled recruitment of high-affinity glucose transporters, but that’s a topic for another day).